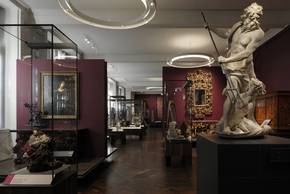 In December 2015 the presentation halls at the London museum were reopened after the redevelopment program FuturePlan started in 2009 with the London architects ZMMA, now presenting Baroque, Rococo and Neoclassicism in newly designed rooms with perfect display cases by GLASBAU HAHN.

The 1909 architecture realized by Sir Aston Webb could be freed from construction changes made in the 70's and extended back in size by one third. Particularly the applied materials such as bronze, walnut, dark stone and leather are now shaping the galleries atmospherically, and the highest degree of conservation security is offered in the spaces as well as in the showcases.

The transformation of the galleries also includes the extension of the exhibition of art and design from 1600-1800 to the year 1815, including Napoleon and his defeat, which clearly shows the end of an era. And the Western European objects from France, Germany and Italy are now supplemented by objects from Spain, Portugal, Scandinavia and Eastern Europe.